Rising Economic Development Spending in the Commonwealth of Virginia

Over the past several years, the State Economic Development Program Expenditures Database team has noticed a sizeable uptick in the volume of state funds Virginia has allocated toward promoting  economic development. This substantial rise in state expenditures is accompanied by relatively stagnant federal funding. 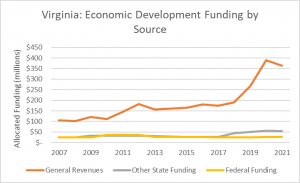 The figure charts the change in state expenditures for the commonwealth of Virginia, broken down by generalized funding category. As the figure demonstrates, beginning in 2018, we have seen a substantial increase in revenue allocated to economic development programs. Noticeably, this change comes soon after the Virginia gubernatorial election in 2017.

Among the new focus areas in economic development, include Governor Northam’s newly established Minority Business Commission. The thirteen-member commission is intended to promote the growth and competitiveness of minority-owned businesses in the state. The commission will be staffed with seven legislative and six non-legislative citizen members appointed through a process involving the state house and senate. The noncitizen members will be selected based on expertise in entrepreneurship, economics, and business and vetted by both the Speaker of the House of Delegates and the Senate Committee on Rules.

The commission is tasked with evaluating the impact of existing and proposed laws on minority businesses, assessing the state’s minority business assistance programs, exploring potential expansions to those programs, providing a forum for minority business owners to address concerns, developing strategies and recommendations to promote the competitiveness of minority-owned businesses, and collaborating with the Department of Small Business and Supplier Diversity.

In addition to the Virginia Minority Business Commission, the legislature has also created the Virginia Innovation Partnership Authority. The enacting legislation was developed in consultation with citizens across the state through eleven town hall forums, incorporating feedback from individuals and businesses so as to better reflect and address the needs of the commonwealth. The Authority’s primary goal is to support the lifecycle of innovation within the state — constructing a pipeline to connect early innovation to pre-seed and seed funding, then to acceleration, to growth, and finally to commercialization. If successful, the Authority will greatly boost entrepreneurship in the state, helping promising technologies bridge the funding gap between early development and full commercialization.

The Authority will focus a majority of its resources on the tech industry. This is a promising strategy, allowing the state to leverage funds on investments with high likelihood of quick capitalization and high return. This focus will allow the Authority to efficiently employ its nearly $65 million in allocated funds over the next two years ($25 million initially, increasing to nearly $40 million in the following year). This model has proved effective in other state contexts. Maryland, for instance, used a similar approach to create innovation clusters in the cybersecurity industry to great effect.

The Authority will market Virginia as a hotbed of innovation, attracting companies and entrepreneurs to invest and relocate. It will explore options and opportunities for promoting innovation throughout the state and develop policies for innovation at the state level. Additionally, the Authority will be responsible for developing and publishing an innovation index. The index will be used to identify promising research areas worthy of institutional attention and state investment, with the ultimate goal of promoting commercialization and economic development efforts.