With approximately 20 million military veterans in the U.S. population, and with tens of thousands more leaving the military each year, it is important to understand who they are and how well they are doing in the civilian workforce.

We were particularly curious about veterans who served after September 11th, 2001 (“Post-9/11 veterans”). Many have exited military service and joined the civilian labor force. Most are younger than 55. This group is more racially diverse (23 percent are non-white) and has a higher percentage of women (18 percent are women) than previous cohorts of service members.

The CREC team compared this group of veterans to the non-veteran population (the rest of the labor force). We found that Post-9/11 veterans:

… Earn more with a certification or license. 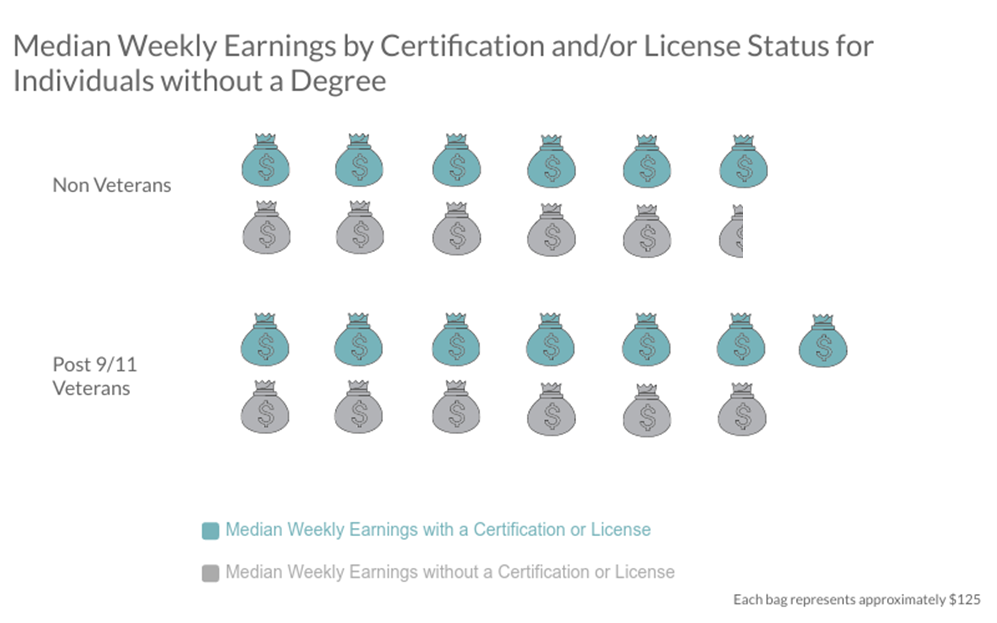 *Most statistics are for veterans and non-veterans that are employed.

Thanks to support from the Lumina Foundation, the Labor Market Information (LMI) Institute publishes statistics regarding attainment of occupation-specific credentials and associated earnings. This blog includes updated information from the Current Population Survey, released in early 2020. For more information on certifications and licenses, check out the LMI Institute’s page on State Certifications and Licenses Data.

In June 2019, the Center for Regional Economic Competitiveness (CREC) and Solutions for Information Design, LLC (SOLID) investigated whether veterans gain occupational certification or licenses. You can download the report here, Certifications and Licenses: Attainment and Earnings for the Veteran Workforce.